Michael Feuer discusses how to manage challenging — and sometimes difficult — employees in this interview with OnTarget Jobs’ HJobs Blog writers.

This article originally appeared on the OnTarget Jobs’ HJobs Blog. Click here to read the original.

You have some reliable and outstanding performers on your team…but dealing with their idiosyncrasies on a daily basis makes you question whether or not they’re worth putting up with. OfficeMax Cofounder and former CEO Michael Feuer gives some welcome advice on how to manage your difficult employees without sacrificing their productivity.

If you’ve ever watched NBC’s The Office, you know that the show makes hilarious use of business-world stereotypes. Granted, the personalities, quirks, and antics of the employees of the fictional Dunder Mifflin Paper Company are taken to extremes, but we find them funny largely because they’re true. We know that guy—the one who cracks terrible joke after terrible joke, unaware that all he’s getting are eye rolls. We’ve also encountered the sanctimonious perfectionist, the attention-seeking prima donna, the unhelpful duty-shirker, and many others.

Sure, it’s funny on TV…but in the real world, dealing with these characters can make leaders want to pull out their hair or throw in the towel entirely. Before you resign yourself to living in your own not-so-amusing TV show, OfficeMax Cofounder and former CEO Michael Feuer provides some commonsense management advice.

“First, know that there is no need for you to waste your time with poor performers or high maintenance employees who have an inflated sense of their own importance and ability,” says Feuer (pronounced “Foyer”), author of the new book The Benevolent Dictator: Empower Your Employees, Build Your Business, and Outwit the Competition (Wiley, 2011, ISBN: 978-1-118-00391-6, $24.95, www.benevolentdictator.biz).

“It’s best to let them know straightaway that they aren’t a good fit for your organization. The dilemma, though, occurs when self-appointed superstars or other difficult types really are terrific and get the job done. And it’s even worse when they believe they’re irreplaceable, along with everybody else—including you.”

Feuer knows what he’s talking about: He has launched a number of successful business ventures, including OfficeMax.

The lessons he’s learned, as he writes in The Benevolent Dictator, have convinced him that leaders are most likely to succeed when their management style mirrors that of a benevolent dictator: At the end of the day, the “dictator” side of you calls the shots and makes the difficult decisions, but your “benevolent” side does so while putting the interests of the organization, your team, and your customers ahead of your own. And though it’s not easy, this means reining in your hard-to-handle employees while still developing their talents.

“Once you identify an employee who is good, but whose personality or habits might present a problem, you have two choices,” Feuer shares. “You can simply get rid of the troublesome employee and risk the consequences of lost productivity. Or you can take the more profitable route and find a way for peaceful coexistence by learning how to deal with the performer’s shortcomings while taking advantage of his or her strengths.”

If option number two sounds better to you, then read on to learn about the three most common types of challenging performers, and how best to manage them:

1. The Prima Donna Modus Operandi (M.O.): He might announce a brilliant solution to a longstanding problem, or he might unfailingly woo the biggest customers. But through it all, your prima donna wants to be applauded, coddled, admired, and generally treated like a celebrity. This behavior consumes your time, disturbs day-to-day operations, and alienates other team members.

The Live with ’Em Solution: The easiest solution here is to put your cards on the table. Tell your prima donna how valuable he is and how grateful you are for his work, but also let him know that he’s a real pain to deal with, and that he’s approaching a crossroads. Ask what you can do to avoid future problems and stress that your door is always open—but make it clear that these behaviors need to change (or else).

“Make him a part of the solution by putting the onus on him to come up with a fix for a peaceful and productive coexistence,” advises Feuer. “Allow him to win, but on your terms, not his. Remember that most prima donnas are typically okay people deep down inside. Usually, their egos have been stroked too much in the past, or they’re hiding a major inferiority complex—or both.

“Sure, prima donnas require more of your time and attention, but the alternative is losing a high performer—potentially forsaking productivity and inciting some major anxiety. If you figure out what makes your prima donna tick, you’ll be a big step closer to neutralizing the annoyance factor while preserving productivity.”

2. The Mr. or Ms. “It’s Not My Job” M.O.: Technically, this person isn’t breaking the rules. She does everything her job description says she should, and she does it very well. But when she’s asked to go above and beyond, expand her role, or pitch in on another project, she responds with, “It’s not my job.”
The Live with ’Em Solution: “Not everything an employee is asked to do is going to fit comfortably into their pre-determined job description,” notes Feuer. “But the fact is, a successful organization is a team effort, and sometimes people need to do more to help out.

“I have come close to firing employees on the spot for refusing to help on the grounds that the task at hand wasn’t their responsibility,” he shares. “Now, I make sure that every member of my team knows that ‘whatever it takes’ isn’t an option—it’s a requirement. Ultimately, it doesn’t matter if someone is an administrative assistant or a vice president—it’s all for one and one for all.

“If you’re a leader, it’s your job to make it clear in no uncertain terms that contributing to success—in any way necessary—is everybody’s job. Oh—and if you’re interviewing someone from a company that went caput, make sure that the interviewee’s attitude didn’t contribute to the downfall.”

3. The Perfectionist M.O.: Nobody can deny that your resident perfectionist is a hard worker. He makes sure every “i” is dotted and every “t” is crossed—every time. He’ll continue to tweak a report or project hours after someone else would have declared it complete.

The Live with ’Em Solution: Normally, an employee who thinks that a half-baked effort is unacceptable would be an asset. The problem is, when it comes to not accepting anything less than perfection, there can be too much of a good thing. As a leader, you must make sure that your employees don’t sacrifice too much time—or end up failing to achieve anything at all—in a quest for the best.

“Don’t get me wrong—I’m not saying that you should encourage lackluster performances or tell your team that they shouldn’t worry about getting it right the first time,” Feuer clarifies. “After all, it can cost your organization quite a bit if time and energy aren’t used wisely. Remember that if you’re putting out a fire in a garbage can, you need only a few gallons of water—not an entire water tanker!

“Try to help resident perfectionists distinguish between tasks that must be done to the letter, and those that can be done just adequately enough to move on to the next step or support another initiative. This is often a learned skill that can be difficult for people—especially those who are fearful of making a misstep—to embrace at first! Therefore, be very clear and cautious when you’re explaining what must be done…and how much time and energy each task is worth.”

“Remember that most major personnel problems within organizations get that way because leaders have ignored a series of smaller issues along the way,” Feuer concludes. “You should absolutely deal with your most difficult personality types—and watch out for budding prima donnas, perfectionists, and unhelpful types in the making! And always keep in mind that you aren’t marrying these employees. You just need to be able to occasionally dance with them.” 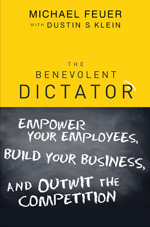 Michael Feuer cofounded OfficeMax in 1988 starting with one store and $20,000 of his own money, a partner, and a small group of investors. As CEO, he grew it to more than 1,000 stores worldwide with annual sales topping $5 billion. He is also CEO of Max-Ventures, a venture capital and retail consulting firm.

Dustin S. Klein, contributor and editor of The Benevolent Dictator, is the publisher and executive editor of Smart Business Network, publishers of Smart Business, the nation’s second-largest chain of regional business publications. He has interviewed thousands of senior executives and civic leaders across America. He is a regular presenter on business-related issues for public and private business audiences and is a frequent guest on television, radio, and Internet programs.